The pace of life is very slow on Rhodes island and it is a place where you very much please yourself and shape your holiday as you want to. You could spend a quiet week or two just in Gennadi relaxing at the villa and enjoying the local beach, but it would be a shame to miss the Greek hospitality in the restaurants and bars where it is their pleasure to serve you and to ensure you enjoy their food, drink and hospitality as well as the wonderful history and scenery this beautiful island has to offer.  Although Gennadi is a lovely area for a relaxing, peaceful holiday, there are a host of wonderful things to do and see on the island.﻿ 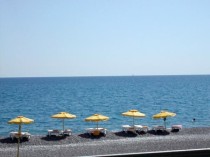 A short walk from the villa is the award winning Gennadi beach. The beach is a mix of sand and shingle and stretches as far as the eye can see.  The sea is crystal clear and gently shelving, ideal for children.   Sun beds and umbrellas are available and there are also showers and a changing hut.  There are three delightful tavernas right on the beach front for a cool drink and delicious fresh food.﻿ 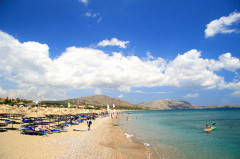 If you are looking for a beach with more activities, Kiotari is a 5 minute drive from Gennadi and offers a range of watersports  click here to visit the watersports website. Glass bottom boat excursions are also available from the beach.  There are several tavernas along the beachfront in Kiotari.﻿ 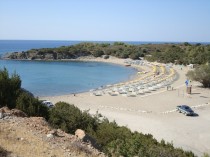 A 10 minute drive north of Gennadi is the beautiful Glystra Beach.  Glystra is set in a sheltered bay with fine sand and shallow water, making it ideal for snorkelling.  Drinks and snacks are available from the small cafe.﻿ 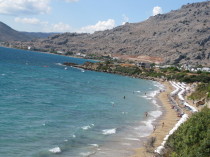 The main Pefkos beach is a 15 minute drive north of Gennadi.  The beach is pure sand with shallow warm waters and has blue flag status.   The calm sea makes it a perfect beach for children and families.  There are many water sports and other activities available, including pedalos, speed-boats and jet-skis.    There are several restaurants, cafes and bars on the waterfront.﻿

Prassonnisi beach to the south is worth a visit, this is where the two oceans meet, the Mediterranean and the Aegean. When the tides are low you can walk across to the tiny island which is the most southerly tip of Rhodes. Many wind surfers and kite surfers use this beach, for more information see our page on Windsurfing and Kitesurfing.﻿﻿

A trip to Rhodes town is highly recommended. It is truly fascinating and you will need a day to fully explore the historical old town and the equally interesting new town along with the picturesque harbour and the unique deer guarding the entrance. Click here for more information about Rhodes.

You can also book day trips to both Turkey and Symi from the harbour and scuba diving and fishing trips are available from boats on the quayside.  Some scuba diving companies visit hotels and the resorts and you will be welcome to go there to watch and take part in the demonstrations in their swimming pools. 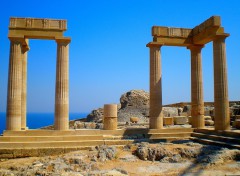 The acropolis at Lindos is magnificent.  Again a good pair of legs and plenty of water are essential if you wish to climb to the top. The restoration work that has recently taken place allows you to see exactly how this historical wonder was in it’s heyday. The views from the top are absolutely breathtaking. On your way back down it is worthwhile spending some time exploring the streets and shops of this enchanting village and to cool off at the beach with its various tavernas is very inviting. Return in the evening to one of the many good roof-top restaurants for a delicious meal and see the acropolis lit up.  There is lively music in the cocktail bars and taxis home are available from the square at the end of your evening. 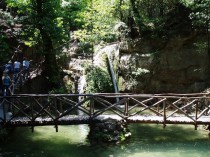 Slightly more sedate sites are available with the beautiful Valley of The Butterflies and Epta Piges (Seven Springs). You will need to be good on your feet to enjoy these two attractions as they are challenging steep walks through woodland. On days out like these it is always a good idea to make sure you take plenty of water. 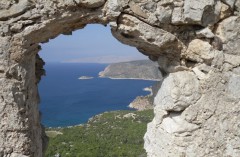 Take a tour of the west coast of the island, taking in the ancient castle at Monolithos set high on the hill built around 1480 by the Knights of St John, and the ancient city at Kameiros. The scenery is very different and the hills and mountains are covered in green forestry. The rugged coastal scenery is beautiful and the roads will take you through some traditional Greek villages selling produce such as honey, olive oil and tapestries. 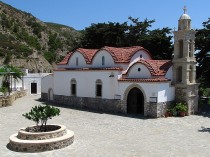 If you travel a few kilometres further inland, close to the village of Apolakkia, you will be able to visit the Monastery of Skiadi, which is nestled among some gentle hills and Mount Skiadi. Seek out the little waterfalls in this region, which are a little hidden away from sight. In this monastery it is not the building that will impress you, as it is a more recent structure because the original 13th century building was partly destroyed, but rather the story behind the icon that graces the monastery. An icon of the Virgin was found in the region and the monastery was built to house this invaluable and miraculous icon. It is believed that the icon “bled” from the cheek of the Virgin after a heretic stabbed the icon some 500 years ago. The monastery is also known as the Monastery of the Panghia of Skiadheni, and it is said that miracles have been performed by the Virgin portrayed in this icon. Nearby, in the sea, a petrified pirate ship tells another story. According to legend, the ship was turned to stone by the Virgin in response to prayers of the locals who feared the marauding pirates. The “ship” is in actual fact a little islet, but worshippers strongly believe it to be a petrified pirate ship.

For The Young At Heart

Children and the young at heart will love the water park at Falaraki.  ﻿The Water Park is packed with fantastic rides and is a full day’s entertainment. Water parks in the U.K are tame compared to this. Food and drinks can be purchased on the Park at reasonable prices.  Click here to visit the Water Park’s homepage.

The go carts at Lardos are great fun and only a ten minute car or taxi ride away from the villa. The nippy carts and challenging track are fun for all the family. There is also a crazy golf course just a few metres away.

There is an eighteen hole, par 73 golf course at Afandou, which is approximately a thirty minute drive. It was designed by an English course architect  and according to the experts it is quite challenging. Green fees and club hire are reasonable.www.afandougolfcourse.com/﻿﻿

Feel free to call us on:

Book direct or via HomeAway

Recommend this page on:

Registered with the Greek Tourism Board (EOT)